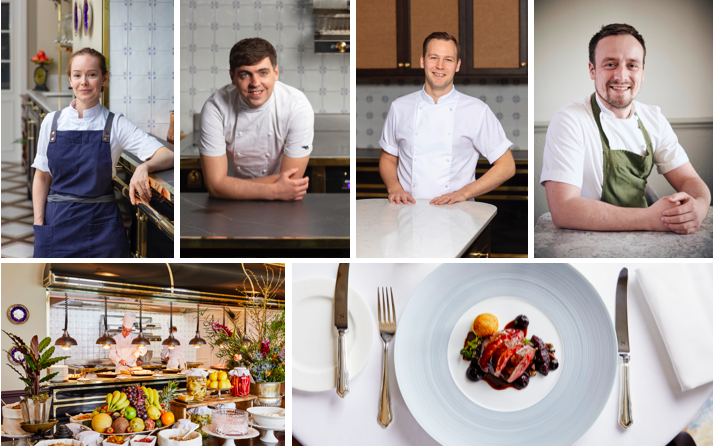 New for 2020, Gleneagles introduces The Strathearn Series, four immersive gastronomic adventures for guests specially curated by Executive Chef, Simon Attridge. From January to April 2020, Simon will invite one chef each month to join him on a one-off collaboration of culinary minds, to bring guests a range of interactive dining experiences in a relaxed, open kitchen setting. Simon has hand-picked four of the country’s culinary rising stars, each of whom head up independent restaurants across Scotland and the UK.

Hailing the next generation of chefs, each exclusive sitting of The Strathearn Series will see just 12 guests interacting over a one-off six-course menu with paired wines – curated by Simon and guest chef, working with the freshest seasonal, local produce. Served up in the open kitchen within Gleneagles’ newly-renovated The Strathearn restaurant, the evening’s festivities will begin with Champagne and canapés followed by a tour of the kitchen and wine room, live showcase of the chefs’ skills and an open discussion on the dishes as they are being prepared.

Winner of the Young British Foodies Awards in 2018 and chef owner of the celebrated, 16-seat The Little Chart Room in Edinburgh, Roberta Hall is one to watch. She runs her own restaurant with husband, Shaun McCarron, formerly Chef de Partie at Tom Kitchin’s Michelin-starred The Kitchin. Known for its small and season led menu, Roberta reveals: “I don’t come up with an idea and allow it to shape my menu; rather I wait to see what’s available and allow the produce to shape my ideas.”

Sonder’s Paul Graham is previously of eponymous three Michelin-starred Restaurant Gordon Ramsay in London. An open plan dining and kitchen experience based around Scottish ingredients and global flavours, Sonder is one of the

newest culinary hotspots in Edinburgh. Paul says: “I’m passionate about finding bold flavour combinations that people might not have considered before. For example, during grouse season use Szechuan pepper and combine it with sharp Scottish berries to complement the flavour of the meat.”

Scott Smith is the owner of acclaimed Edinburgh restaurant, Fhior, a unique hyper-local dining experience where guests head in ‘blind’, not able to see the menu until they have eaten it. Defining his style as ‘modern Scottish’, Scott trained under Michelin-starred chef Geoffrey Smeddle at The Peat Inn near St Andrews and in 2016, revered food critic Marina O’Loughlin said of Smith: “a new Scottish star is born”. He has since been awarded a Caterer Acorn Award (30 under 30) and earned a spot within the coveted ‘Sunday Times Top 100 Restaurants’. Scott says: “my dishes are reactive to what’s happening on the outside and with our producers at that given moment.”

The finale of this collaborative series will see Sam Carter of Restaurant Twenty-Two stepping up on Monday 27 April. Formerly of some of the finest restaurants in the country including Gordon Ramsay’s Maze and Hambleton Hall, he is co-owner of Cambridge based Restaurant Twenty-Two, where seasonal British produce done simply is given a creative twist. Of his collaboration with Simon in late April, Sam says: “guests can expect an abundance of fresh spring flavours and colours.”

Of the new series, Simon says: “we want to break down the barrier between the restaurant and the kitchen by inviting guests to join in the fun. I want our guests to feel like they’re coming round to my house for a dinner party. As chefs, it’s important to be open to continual learning, and collaborations are a fantastic way to share skills and knowledge and develop ideas.”

“All our guest chefs represent different culinary styles and backgrounds, but they share a common passion for great food and the best seasonal produce. We’re delighted that many of the dishes we’ll be creating for the series will help us mark Scotland’s designated Year of Coasts and Waters, by spotlighting and championing Scotland’s unrivalled natural larder of fresh, sustainable and delicious seafood.”

The Strathearn Series package costs £500 in January-March and £550 in April, including dinner for two guests at one of the events, an overnight stay in a Country Room and breakfast.

To book, and for more information on The Strathearn Series, contact Reservations at [email protected] or on 0800 704 705.

With so many professionals still working from home, the hotel is extending its welcome to not only holiday-makers, but to those in need of an inspiring change of scenery and a renewed dose of motivation

A unique 15th century monastery meticulously restored over the last twenty years opens this summer on the Croatian island of Lopud. Available to rent exclusively from July – September 2020 and per suite in the Autumn and Spring.

Maldivian-owned Milaidhoo Island Maldives and The Nautilus Maldives are delighted to announce they have exclusively chartered a 100-seat private jet, in order to run a one-off flight from London to the Maldives this summer.