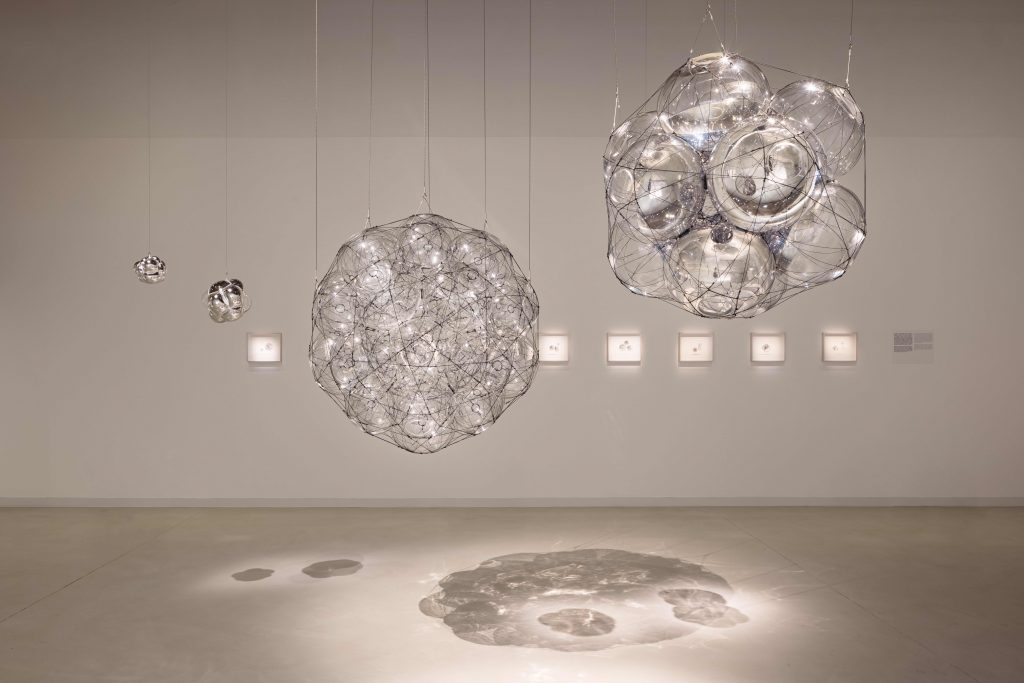 The exhibition which focuses on the preservation of diverse ecosystems is curated by Rebecca Lamarche-Vadel – showcasing the works of Argentinian contemporary artist, Tomás Saraceno

Set in over 1,000 hectares of protected nature-filled countryside comprising forest, grassland and lakes, Domaine des Etangs is abundant with rich flora and fauna and nature is at its very core

The Domaine is an art & design destination within itself with a resident collection including works by the likes of Pablo Picasso, Henri Matisse, Ugo Rondinone and Richard Long

April 2022 – Domaine des Etangs is delighted to announce that the exclusive art exhibition Du sol au soleil (from the ground to the sun) currently being hosted in their La Laiterie art space has been extended until 2nd October 2022. Curated by Rebecca Lamarche-Vadel, the exhibition spotlights Argentinian contemporary artist, Tomás Saraceno’s work focusing on the “connection between what lies below and above the Earth’s surface”.

Tomás Saraceno seeks to devise new modes of ecological sensitivity, depicting an era free from borders and fossil fuels.  Sitting next to the historic 20km2 Rochechouart meteorite crater, Domaine des Etangs is a magical place celebrating and uniting entanglements between the aquatic, the terrestrial and the celestial and has inspired the exhibition which focuses on the preservation of diverse ecosystems. Du sol au soleil showcases human and non-human universes, revealing their choreographies, and the limitless yet fragile bonds that unite these worlds. While some human activities continue to threaten entire ecologies, Du sol au soleil is an invitation for guests to rethink alternative ways of inhabiting the world. Tomás invites his audience to discover the visible and invisible worlds surrounding humans in a very politically active way with the aim of defending, supporting, and protecting these worlds. For example, the ‘Spiderweb’ on show encourages visitors to recognise something that causes fear and phobia to many is instead something which is very harmless. Guests can also discover Tomás’ floating world via the Thermodynamic Imaginary which attempts to perceive the possibility of an “Aerocene” urbanism, as well as a futuristic view of new relationships between humans and the Earth system, reaching an ethical commitment with the sun, the atmosphere, and the planet. This work suggests humans get back what they create in the form of pollution, an airborne attack.

Domaine des Etangs is an art destination in its own right and is helping to put one of the most beautiful, unforgotten areas of rural France on the map for the first time. Once a family home, Domaine des Etangs is set in over 1,000 hectares of protected nature-filled countryside comprising forest, grassland and lakes. At the heart of the property lies a fully renovated 13th-century château, interior designed by Isabelle Stanislas – the designer commissioned to transform the reception room of the Elysée Palace in Paris, which has not been touched in over 300 years. The château is a continuous dialogue between old and new, boldness and simplicity and is brought to life by Isabelle. An architect by profession, Isabelle Stanislas is one of the few interior designers and decorators who develops a truly ‘artistic’ approach to the structure of the building. The château is surrounded by landscaped gardens and lakes, filled with art installations and sculptures including those by Richard Long and Irina Rasquinet.

La Laiterie, the setting for the exhibition, is also home to two libraries, located in mezzanines on each side of the converted barn, representing the Past and Future respectively, with the art space in-between, which symbolises the Present. Israeli designer Raphael Navot designed this entire space and focused on custom design and made-to-measure interiors, combining traditional methods with contemporary ‘savoir-faire’. He worked closely with Nicky Dunne of the iconic bookshop Heywood Hill in London in order to complete the library representing the Past. Raphael gave the library representing the Future a softer, lighter feel, complete with Chesterfield sofas, giving the sense of a gentleman’s club.

Originally built in 1822, the hotel is now being meticulously transformed by Oetker Collection and owners, Reuben Brothers

ENJOY LE BRISTOL PARIS IN FULL BLOOM, WITH NEW SEASONAL OFFERINGS FROM THE CITY OF LIGHT’S ORIGINAL PALACE HOTEL INCLUDING THE REOPENING OF ITS BEAUTIFUL JARDIN FRANÇAIS, A FRESH NEW ‘SENSORIAL RESET’ SKIN TREATMENT IN THE TATA HARPER SPA SUITE, AND A GOURMET CELEBRATION OF 10 MICHELIN YEARS AT 114 FAUBOURG

CELEBRATE IN STYLE THIS JUBILEE WEEKEND AT THE LANESBOROUGH, LONDON

AHEAD OF THIS ONCE IN A LIFETIME CELEBRATION, SCOTT DUNN HAS CURATED A SELECTION OF HAND-PICKED JOURNEYS TO DISCOVER ICONIC PALACES AND ROYAL DESTINATIONS AROUND THE WORLD