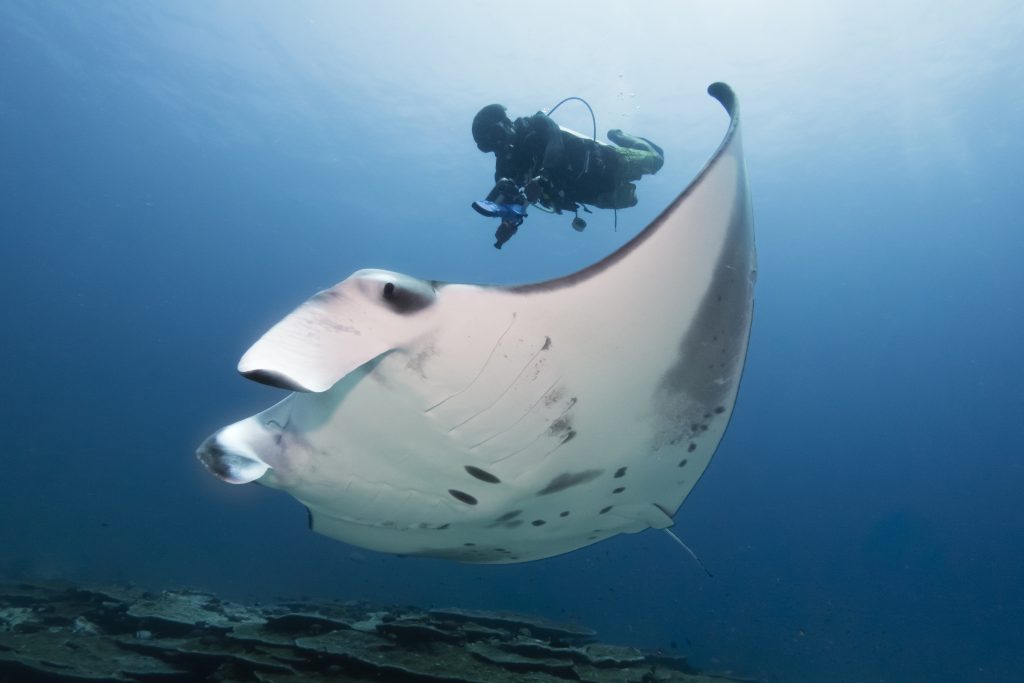 The Maldives Underwater Initiative (MUI) at Six Senses Laamu was founded on the principle of uniting people and organisations with a shared vision for the conservation of the marine environment in Laamu Atoll. With this vision in mind, MUI facilitated introductions between the creators of the world’s first non-invasive underwater ultrasound scanner and provided a site for field testing. MUI is a team of 10 marine biologists from Six Senses Laamu, the Manta Trust, Blue Marine Foundation and Olive Ridley Project who lead the tourism industry in the Maldives with marine conservation efforts based on research, education and community outreach.Two years ago, MUI brought together some of the great minds in veterinary technology and challenged them to create a device that could ultrasound scan Laamu’s resident population of reef manta rays (Mobula alfredi).“MUI aims to be a marine conservation visionary,” says Marteyne van Well, Six Senses Laamu general manager, “One of the ways we’re leading conservation efforts in the Maldives is by providing a platform for discussions on, and the field testing of, this world-first technology.” Following a visit to Six Senses Laamu, Vetsonic (UK) Ltd Founder Ray Rochester approached veterinary imaging leaders IMV Imaging with the idea of developing a scanner to meet the rigours of diving at Manta Point, a manta ray cleaning station (the manta ray equivalent of a Six Senses Spa) just a 10-minute boat ride from the resort that researchers from the Manta Trust have been studying since 2014. IMV Imaging’s Duo-Scan:Go Oceanic is the first ever technology to allow contactless scanning of wild marine animals at depths of up to 98.5 feet (30 meters), while also being portable (the dive rig weighs less than 4.5 pounds (2 kilograms). The aim of bringing this technology to Laamu was to scan wild pregnant reef manta rays in order to study gestation and embryonic development.Laamu is home to 125 reef manta rays, which display courtship behaviour during two annual courtship periods: May-June and October-November. Each year the Manta Trust has identified between one and 11 pregnancies.Manta Trust researchers have been field testing the Duo-Scan:Go Oceanic in Laamu for the past year and a half. Over this period, they successfully developed approach methods and obtained ultrasound scans of wild pregnant and non-pregnant reef manta rays.“We know very little about where these reef manta rays go to give birth and how long gestation lasts in the wild. This ultrasound technology could allow us to determine rates of reproduction in the wild and this information would help guide conservation strategies for this threatened species.” says Nicole Pelletier, Manta Trust project manager at Six Senses Laamu.This project was a collaborative effort between the Maldives Underwater Initiative at Six Senses Laamu (including the Manta Trust), IMV Imaging, Vetsonic (UK) Ltd and The University of Cambridge Veterinary School.

Xigera Safari Lodge, Africa’s most exciting opening for 2020, partners with the acclaimed Matetsi Victoria Falls to offer a once-in-a-lifetime combination of African wilderness and contemporary design

The ‘Sólo Para Mí’ (Just For Me) wellness programmes encourage guests to slow down the pace and indulge in a little self-care, amidst the Mexican bolthole’s soothing, verdant surroundings

A romantic mountain outpost available for private dinners and celebrations.